A Macro is a group of Commands to be fired in sequence, each with an adjustable delay.
A macro can be made of up commands from any system in your project, allowing you to control multiple devices from a single button press.

A Macro can be used in the following plages: 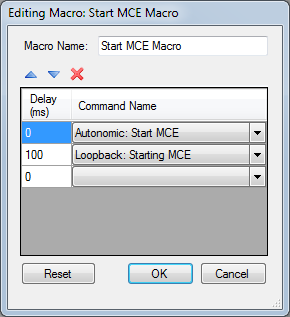 The delays in a Macro are additive. For example, if a Macro had the following delays set and was assigned to a Button:

This defines which command will be fired. Note that Macros cannot contain other Macros. This was done to prevent any accidental macro looping. 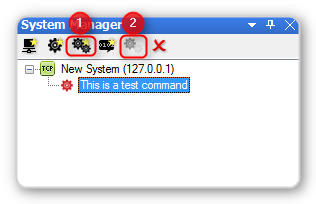 To create a new Macro, press the (1)Create New Macro button in the System Manager toolbar.
The Macro Properties dialog will then be shown, and after the Macro is created it will be added to the bottom of the System Manager tree along with other Macros in alphabetical order.

To edit an existing macro. Press the (2) Edit Macro button. The Macro properties dialog box will be shown for the macro you selected, you can then make changes as required.

To change the order Commands are fired in Macros, simply select the command row you want to move by clicking in the Delay property of the adjacent command, then press the Up or Down arrow buttons in the toolbar.

Deleting a Command from a Macro

To delete a Command, first select it (using same method as for ordering commands) then press the red X in the toolbar.
The Command will then be removed from the Command list.

At any time during editing a Macro, you can reset the macro back to how it was before editing by clicking on the 'Reset' button (or pressing cancel and editing the macro again).
Pressing cancel at any time will cancel any changes made since opening the Macro Properties dialog.

Press the OK button at any time to save the changes made to the Macro.