The Feedback Properties dialog is opened when you are adding a new feedback item when you double click on an existing feedback item within the System Manager tree view to edit its properties. 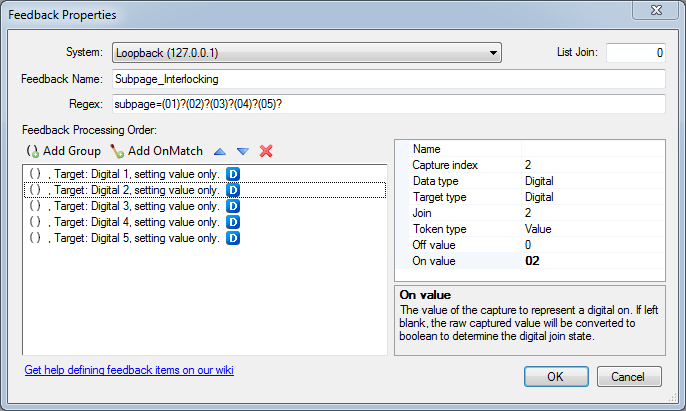 Select the existing External System to assign the feedback item to. You must have at least one system defined in your project to add a feedback item.

The feedback name must be a unique name in your project (no systems, commands, macros or feedback parsing can have the same name). When entering the name details, the OK button will be disabled if the name is already in use within the project.
The feedback name will be used to identify the feedback within the System Manager tree.

This is where you enter the regular express that will be used to parse the feedback. See Feedback Parsing for more information on defining regular expressions for use with system feedback parsing.

Using the toolbar, you can add new capture groups and onmatch items, as well as adjust the order in which they are processed, and also delete items from the processing order.
The order of items is important as it defines the order that they are processed when the regex matches incoming data.

For each capture group in the defined regex (basically the parts between the round brackets) you should define an associated Capture Group item.
Each capture group has a few options which can be defined:

The name of the capture group is for identification purposes, as well as defining the token name if you are assigning a token. You can enter any name you like, but the idea is to use a descriptive name so when come back to edit the feedback properties again later, you can easily remember what data the capture group is meant to be capturing. If assigning a token, we recommend wrapping the name in square brackets so you can easily identify the token name when using it in dynamic commands, etc, later on.

This name can be referenced in other feedback properties by wrapping the name in dollar signs. So for example, if the capture group was given a name myData then we could reference it within other capture groups or onmatch items within the same feedback item by using $myData$.

The data type of the join number assigned to this capture group. The options are:

See the Join Types page for more details on join data types. Note that this data type refers only to the data itself that is coming in. Different data types have different options (more info below).

This is the type of object you are targeting with the capture group. The options are:

A Global target type can only be used for setting global tokens.

The join number of the target type to assign the captured data to. This join number should match a GUI object within your project pages and subpages.

Read more about tokens in our Tokens wiki page.

The minimum and maximum value options are only relevant if the Data Type is set to 'Analog'. They allow for the value to be scaled to the 0 to 65535 range that sliders and gauges use.
For example, if your TV set reports a volume range from 0 to 100, and you want to display this data in a gauge, you would want the gauge to be full at 100 and empty at 0. So set the min val to 0 and the max val to 100, then any values between that range that parse through the feedback system will be scaled to the 0 to 65535 range before being assigned to the analog join.

Off Value & On Value

If only the off value or only the on value is assigned a value (and one of them is left blank) then the join will change state to the defined value only on an exact match, and all other times would change to the undefined value. For example, if the 'on value' was assigned a value of “PON” then the digital join would only be set high/active when the exact text “PON” is received. Any other data captured would result in the join being set low/inactive.

This option is only relevant if the Data Type is set to 'Analog'. This allows you to perform math expressions on the captured value before assigning it to the chosen join or token.
See the Math Expressions entry for more details on how to use this field.
You can enter the value captured by the capture group simply as value.
You can use data captured by other capture groups into the transform field by referencing their name wrapped in dollar signs, eg. $captureGroupName$.

This option is only relevant if the Data Type is set to 'Analog'. This allows you to convert a hex value to a decimal value using the following options:

This option is only relevant if the List Join is a number above zero. This allows you to calculate which item in a list that captured values in this feedback item will be assigned to. This is a Math Expressions, where the 'value' variable is set to the captured value of the capture index.
For example, if part of the incoming message specified a list index, you can capture it and use the value to tell the feedback item which index it is assigning other capture group join values to. Remember that the list index is zero-based, so a common use of this property is to set it to 'value-1' if the incoming data is 1-based.

Refer to Target Type in Capture Group description above. This property works exactly the same for both Capture Groups and OnMatch Items.

Again, refer to Join properties in the Capture Group description above. The only difference here is that onmatch items can dynamically assign the join number using math expressions and referencing other capture group names (by wrapping them in dollar signs). See a demo of dynamic join value assignment on GitHub.

This option allows you to choose whether you want to assign a value to a token or join.

This option is only relevant if the Assign Token option is set to True. When assigning a token, this is the name of the token to be assigned. This name is how you reference a token in other aspects of guiDesigner, such as in dynamic Commands.

The value property is where you enter the value you want to assign to the join or token. This property allows you to embed math expressions by wrapping the math in double curly braces. You can also reference other capture indexes by name in the value field, by wrapping the capture group name in dollar signs.

See the Math Expressions entry for more details on how to use this field. As an example, you could set the value property to any of the following: