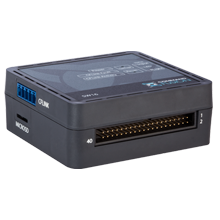 SW16 has 16 dry contact inputs, allowing you to integrate any existing or custom button panels with your system.

Need a custom keypad?
Create your own easily.

Using the 16 dry contact inputs, and 16 dimmable LED outputs, you can create your own custom button panels that interface with your system over CFLink.

With 16 dimmable LED outputs, and 4 dimmable backlight LED outputs, you can control the status feedback to your users with blinking, ramping, LEDs.

Using the powerful rules engine embedded into the SW16, you can trigger basic or advanced macros from events such as button presses and releases.

The SW16 is used to interface physical buttons to the CFLink network. With 16 x Dry contact inputs, you can connect up to 16 momentary or toggle switches to control your automation system. The 16 channels of dimmable LED outputs allow you to show feedback states for the buttons, and 4 dimmable backlight LED outputs can be used to backlight your keypad if required.

All CFLink devices, including the CF Mini, support a powerful rule triggering engine. This allows you to trigger macros to run when a specific event occurs - such as reading a specific value via the I/O ports, or on incoming data via the RS232 port. Using the rules engine, you can setup basic or complex automation actions.

The 16 dimmable LED outputs and 4 dimmable backlight LED outputs can be controlled via the CFLink protocol. This allows you to not only turn these LEDs on and off, but you can set the dimming level of the individual outputs, in 100 steps. There are also commands to ramp between levels, blink the LED (set number of times or continously) and dim up/down in a loop. This means you can show all sorts of feedback states via these LED outputs. You could even use 3 channels of the LED outputs to drive a single RGB LED for multi-color feedback states.

Although you could use any off the shelf button panel and wire the buttons up to the SW16, you could also create your own custom button panels to suit any task. Put a few buttons together on a wall plate material of your choosing, and create physical interfaces for industrial automation tasks.