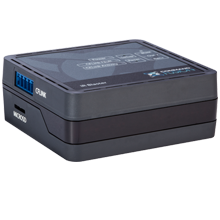 Flood a room with infrared signals.
Go where cables can't.

IR Blaster has 270° coverage, to control ceiling fans, wall-mounted airconditioners, and other hard to reach devices.

270° blaster output.
Control anything in the room.

Control all devices in a cabinet from a single blaster output, as well as those hard to access devices such as ceiling fans and wall-mounted airconditioners.

Additional IR in & out.
For more direct control.

There are additional IR output and input connectors on the side, allowing an emitter to be used for more direct IR control and IR receiver placement.

The IR Blaster is a multi-functional IR control device. Featuring a 270° IR blaster on-board, as well as an additional 3.5mm jack for an IR emitter, you get the best of both IR control worlds - room flooding and directional control.

All CFLink devices, including the CF Mini, support a powerful rule triggering engine. This allows you to trigger macros to run when a specific event occurs - such as reading a specific value via the I/O ports, or on incoming data via the RS232 port. Using the rules engine, you can setup basic or complex automation actions.

The on-board IR receiver and additional 3.5mm jack for an IR receiver (not included), provide a way use the incoming IR signal to trigger macros via the Rules Engine. So you can use any IR remote control to perform actions throughout your automation system, such as control your lights or security system.

All IR emitting devices in the CommandFusion range include an on-board IR database, with over 500,000 IR codes built in. If the device you want to control doesn't exist in the database, simply use our IR Learner to learn the IR codes and create an IR file ready for storage directly in the IR Blaster's on-board memory.